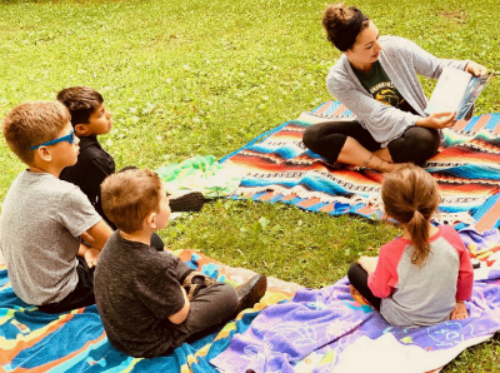 I have known for a long time now that I’ve wanted to teach yoga to adults because of how it has benefited my life in so many areas. It was somewhere between the emotional/growth leap temper tantrums and the terrible twos of my own children that I realized these same benefits I’ve experienced through my own practice of yoga could be put into a concept that my children would love and understand. Something they would be able to implement into their own lives to help them deal with some of the big emotions they were experiencing.

After finishing my 200-hour yoga teacher course I continued on with a kid yoga workshop where I realized a lot of what I was already doing in daily life could be twisted into a fun yoga game or a breathing technique that they could use when they needed to get a grasp on their own feelings. Something I would want to teach them when we were being silly together or just having fun in a noncompetitive environment. Making it into a way that they would be able to refer to when things were getting heated or out of control. Thus, teaching them the ability to relax while being able to fully participate. Not only that but it connects them with their own emotions creating much needed self-awareness and self-esteem.

After teaching a variety of ages I have found that you can start implementing yoga as early as the age of 2 or even younger in some cases. At this young age we are just starting to introduce the idea of yoga and what it’s all about. The pressure to perform well is off. It’s all about exploring poses, their body, and connecting to how the breath and movements make them feel. A class for a 2 to 10 year old would look a lot different than a class for a 11+ year old, but the concepts remain the same.

Beyond the benefits of self-awareness I’ve mentioned, we are also allowing them to build flexibility, strength, coordination, and awareness of their surroundings resulting in creating a calmer, connected self. Giving them space to be exactly who they are meant to be allows that beautiful inner light they have to radiate through.

So how do I implement this practice into my daily life? If you are a parent to little people, then you know the toughest thing to do with children is hold their attention long enough to teach them anything, let alone something like stillness. Children love to talk and express themselves through movement. To start just get into your role-playing mode. You can read a book and go back to each page to find animals that could be yoga poses or shapes and letters that can translate into down dog or airplane pose. Bonus points if they can verbalize the dog howling at the moon or the airplane noises rushing through the air. You can even sing your favorite song while holding the pose challenging your balance, focus, and the ability to complete a task. When you allow your children to verbalize in a pose, you are providing them an environment that is loving and creative, and opening them to the opportunity to discover their own truth. They can connect deeply to each character/pose. How does it feel to be a dog howling at the moon? What would it sound like? One of my favorite animal poses to perform is going through the life stage of a butterfly. Starting as a caterpillar only able to crawl around. Have them imagine what color they would be. What would they eat? What do their surroundings look like? Then weaving their cocoon and taking a long slumber while they transform into a butterfly. Have them emerge from their cocoon. What color are they now? Are they fuzzy or have big or little wings? How do they move? How does it feel to be a butterfly? What do their surroundings look like now? This type of role playing is teaching them so much and giving them the ability to create a deeper connection through imagination and visualization.

I am going to give you a breathing technique that I like to use but before I do, I want to note that it’s important that they take deep breaths in through their nose and exhale through the mouth. If you are just starting to implement calm breathing, then refer to the phrase “Smell the flower and blow out the candle”, giving them the tools to perform the breath in the proper way. I note this because breathing in through their mouth can cause them to become agitated. Okay onto the technique. This is one I pull out when they are getting riled up when they shouldn't be or maybe a little out of control right before bedtime. I like it because it meets them at their level all high and full of energy and then slowly allows them to calm down. It’s called Breath Like A… These are the sounds I like to use but feel free to get creative and explore what sounds work for you. I tell them what to breath like and together we do the breath 3 times before going to the next sound.

Take a deep breath in (through the nose) and breath like a Bee… BZZZZ
Breath like a snake ...SSSS
Breath like the wind ...WHOOOSSHH
Breath like your mom when she’s telling you to be quite ...SHHHH

Repeat each sound 3 times before moving on to the next one.

Kid yoga doesn’t have to be extensive or long. You can pull it out at any time either when you are trying to kill time somewhere or just connecting to your child. Just get creative and have fun.